Since winning the Metro Imaging x Free Range Mentorship Award in 2017, we’ve had the pleasure of working closely with artist Alexander Mourant, who is currently studying at the Royal College of Art and represented by Seen Fifteen Gallery. As part of Photo London 2019, Alexander was chosen to produce the annual Financial Times Weekend Magazine MY LONDON commission to coincide with the event, exploring his feelings about the capital and resulting in To Feel its Touch.

‘One morning, I was making a routine journey from High Street Kensington towards Hyde Park, walking along the bustling pavement, swooping in and out of pedestrians. My mind was elsewhere but my legs knew where they wanted to take me. I came to a road crossing, which halted my momentum and ruptured my train of thought. To the right, off the main high street, was a small residential road cordoned off by the all- too-familiar orange barricades. I navigated the vibrant caution signs and gasped: the road I knew was no longer a road. Instead, I was met with a vast, deep void. I paused for thought. The road was entirely excavated, unearthed, a tomb in waiting; resonating, like Michael Heizer’s land art work “Double Negative” (1969).

This early-morning encounter led to a series of ideas, or trigger points, for creating work addressing London and my place within it. I began to realise that London is essentially an interwoven lattice of materials – combining and dividing – instigating our meeting and plotting our separation. I considered the past years, the rampant dashes and long summer strolls; would this material remember me? Does the pavement, and the earth beneath it, feel my touch?

In February, I kept an eager eye on the Transport for London website, waiting for an update on my various “hotspot” locations. I had centred my search around my uncle’s flat in Chiswick. This is my place of origin within the city: if any place was to hold echoes, a deepness of time, it would be there. In a fortuitous turn of events, there was an excavation under way in the road alongside my uncle’s flat. I approached the site, sought permission from a rather bemused construction worker, and collected some of the excavated material. I took this mixture of earth, rock and sand with me to the darkroom.

The work I present here utilises this found material, suspended in water inside a large tank, to create abstract, interconnecting photograms that fluctuate across large- format negatives. Taken during one exposure, this intensely physical process imbues itself with suggestive qualities and personal memory. I feel a containment, while simultaneously sensing fluidity and movement. I can see magma spreading under the earth’s crust, burnt clouds, or a murmuration of starlings. My art seeks to stop you, to ruminate with and engulf you. To feel its touch.’  – Alexander Mourant

Alongside this, Mourant was also selected to appear as part of Peckham 24 in the group show For Those Who Could See Beyond the Surface, curated by Emma Bowkett. For this, he created site specific work inspired by the FT Weekend commission, produced simultaneously. Having noticed a high amount of development activity within the area, Alexander took material directly from a Peckham Rye construction site (just outside the Bussey Building) and created a unique image using the aforementioned process. The subsequent grids created work both separately and together as a set; much like the city itself, ‘[it’s] the same material but the structure is continually changing’.

For the exhibition itself, Metro were pleased to work yet again with Mourant in order to produce Fine Art Giclée Prints, expressing the vivid colour of the artist’s images.

2. Installation Image: Alexander Mourant in For Those Who Could See Beyond the Surface, Copeland Gallery, 2019. 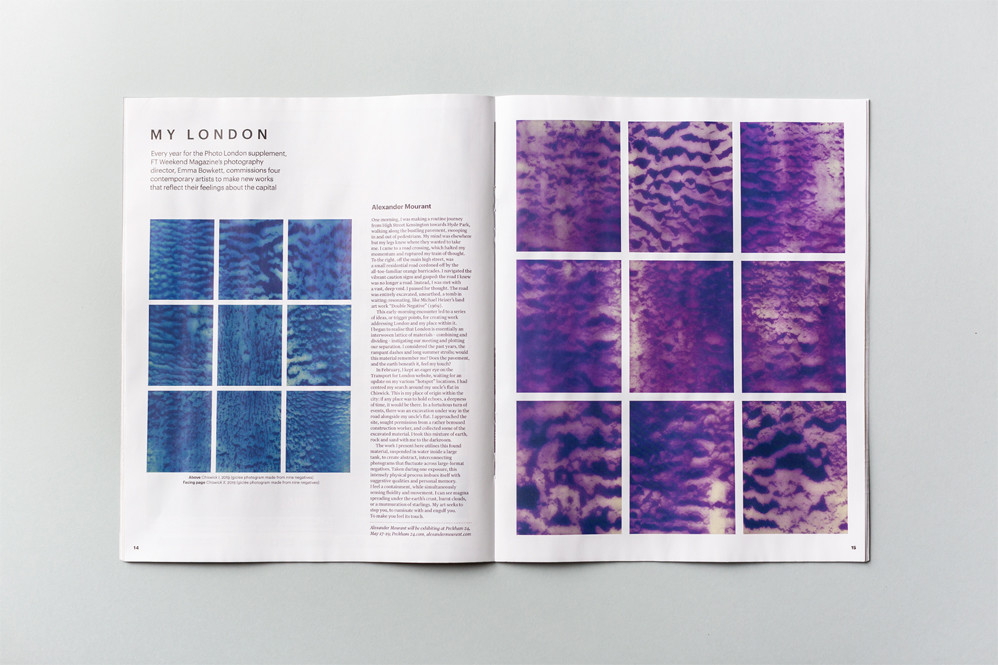