British photographer David Severn was awarded the Under 30’s Gold Award at Royal Photographic Society Awards 2015 for his image ‘Miss Mansfield 2013-2014’ from his ‘Thanks Maggie’ project. Part of his prize for this prestigious award is a Metro Imaging Mentorship of a 12-month tailored programme from the experts here at Metro Imaging.

We caught up with David 3 months into his year long program to see how the mentorship is helping his work and what special highlights he’s had so far.

1. Firstly congratulations on winning this year’s RPS/Metro Mentorship Award – what does it mean to you to have won?
Thank you! It feels great to have this validation and recognition of my work; particularly as the portrait I entered forms part of a long-term personal project.  Winning the award has really strengthened my confidence in my practice and given me great encouragement to delve deeper into my work and build on my successes.

I’m also very grateful to be given the mentorship opportunity by Metro. I’m looking forward to using my programme as a platform to explore new ideas this year and benefit from professional support.

2. You are already a few months into your 12 month programme, can we ask what you have already gained from this one-on-one mentorship and what are you still hoping to learn
I’m currently researching and forming connections ahead of making a new series of photographs which will follow on from my recent project, Thanks Maggie. I’ve had an initial discussion with Steve Macleod at Metro which helped me to crystallise what my goals and priorities for the year should be. I’m looking forward to presenting my first set of pictures for the new series in the near future and kick starting an ongoing critique, which will hopefully support me in making decisions about approach, visual narrative and direction of the work. I don’t want to say too much about the themes of the new project at this point though!

A sticking point for me over the past few months has been the presentations of my work, I currently only have flatbed scans of my negatives which lack the colour depth and detail of a higher quality scan. So, I’m hoping to make use of the facilities at Metro too, particularly the drum scanner.

3. You work primarily as a documentary photographer with a particular interest in working class culture – what inspires & draws you to this subject?

I’m from Mansfield, a former mining town in the North Nottinghamshire coalfield. My Father and Grandfather were both miners and many of my family worked at the pits or in industries that provided to them. The people and places in my photographs are the characters and landscapes I grew up among and identify with.

These communities suffered a heavy blow with a lasting legacy after the consecutive colliery closures of the 1980’s and 90’s, leaving mining towns and villages devastated by mass unemployment and accompanying social problems. Despite all of this, the men and women who I encountered growing up were nothing short of heroic and my work is a celebration of their lives and culture, as well as a depiction of their plight.

4. When did your interest in photography begin and have you always had an ambition to become a photographer?
I started playing around with a camera I was bought as a gift when I was a teenager.  I loved the immediacy of it and the endless experiments it provided.  I was always a creative person but didn’t do well at art in school.  Photography is a very democratic medium, which is something I love about it.  Suddenly I was able to explore my creativity in a way I wasn’t able to before.  Later on I became interested in telling stories with photographs and looking at documentary photography.

5. Do you have any interesting current projects or upcoming exhibitions you’d like to share with us?
I’m beginning work on a commission to make a series of photographs within The National Forest, an evolving landscape stretching over 200 square miles across parts of Leicestershire, Staffordshire and Derbyshire.  The area is being planted, in an attempt to blend ancient woodland with new plantings and create a new national forest.  This new commission will explore stories of the changing land alongside the life and work of its people.

I’m also in the early stages of a new personal project but I don’t want to give away my plans for that just yet!

6. What are your ultimate photography/career goals?
I get the biggest sense of fulfillment from shooting the work I want to make and seeing a project come together. It’s a privilege to have the means of expression and license to invoke a feeling, tell a story or play with reality, so my goal is to continue doing that.

For information about David Severn

For the 2015  New York Times feature on David’s ‘Thanks Maggie’ Project.

For information about the RPS International Print Exhibition

1. Thanks Maggie_David Severn :Man playing a game of Bingo at Boothys Working Men’s Club in Mansfield Town. Working Men’s Clubs such as this began in the 19th Century in industrial areas of the UK to provide recretaion for working class men and their families, however many clubs have closed following the decline of industry.

2. Thanks Maggie_David Severn: A group of Rabbit hunters in pursuit of a catch on the former Newstead and Annesley Colliery site. Hunting for food and sport goes back many generations in the area and is a means of income

3. Thanks Maggie_David Severn: Stephen, an ex-miner and Elvis Presley fanatic at home with his 1950’s Wurlitzer jukebox. Rock ‘n’ Roll culture was embraced by British working class communities in the 1950’s, owing to similar social developments as the US and the emergence of distinct youth leisure activities and sub-cultures. Today, the ex-mining generation has many Rock ‘n’ Roll fans and various tribute acts who perform in the Miner’s Welfare social clubs. 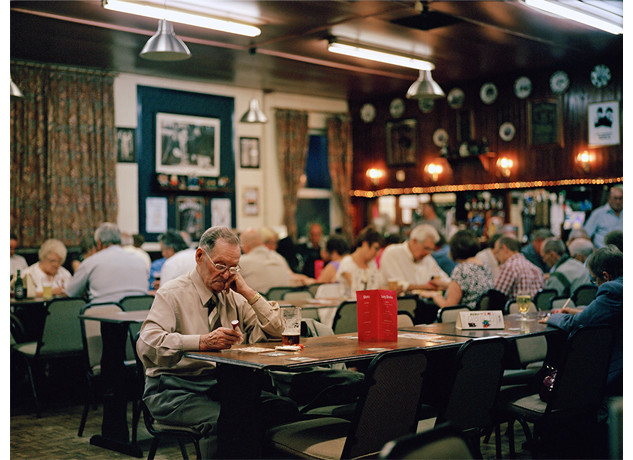