Agua Nacida,” Spanish for “water born” is a unique collection of large-scale images by renowned fashion and beauty photographer Hugh Arnold.  The exhibition at the Hilton| Asmus Contemporary in Chicago marks Arnold’s north American debut and features breath-taking underwater images shot in the waters off the coast of Fuji and Gozo.

Inspired in part by the human life cycle, “Agua Nacida” explores the beauty of the human form and symbolic transition from womb to womanhood, whilst showcasing the body so that the models appear to become one with the sea life around them.  The large scale Lambda C Type images, all produced by Metro are photographed and printed without the aid of digital enhancement.

Arnold originally trained as an actor before being enticed into the world of photography by the light and natural outdoor elements of Australia allowing his exploration of photography to develop creatively without commercial constraint, photographing “Underwater Nudes.”  Learning to scuba dive in Egypt he equipped himself with the best quality equipment and flew to Australia to pursue his mission. Cold Antarctic currents, poor visibility, box jellyfish, and sharks all conspired to push him further afield to Fiji where he shot until storms made diving impossible.  He continued his mission in Gozo, an island off the coast of Malta with supermodels Nika Lauriatis and Polina Barbasova.

In an interview with HUNGER TV in London, Arnold explained, “I wanted Agua Nacida to span the symbolic transition from the cocoon of the womb, to carefree childhood, the discovery of adolescence, the sensuality of womanhood and the pain of birth, depicting each stage in the process through physical actions. I realized that I was touching something much more profound than I set out to do because everything that I had done up to this point professionally had included artifice and ego in some form or other. The moment you submerge yourself in water, no matter who you are, the ego disappears and you touch the true essence of your nature. It’s almost like going back to the beginning, being reborn, hence the title of the book – Agua Nacida i.e. water born. The images take us on a parallel journey beneath the surface of the sea.  Our souls’ hidden waters come from a powerful, pure and deep place that I am only now starting to understand.  We are all water born….”

In addition to the large-scale photographs, Arnold has compiled a book containing a collection of over 175 stunning, original colour photographs exploring the ocean and ourselves in a new way. 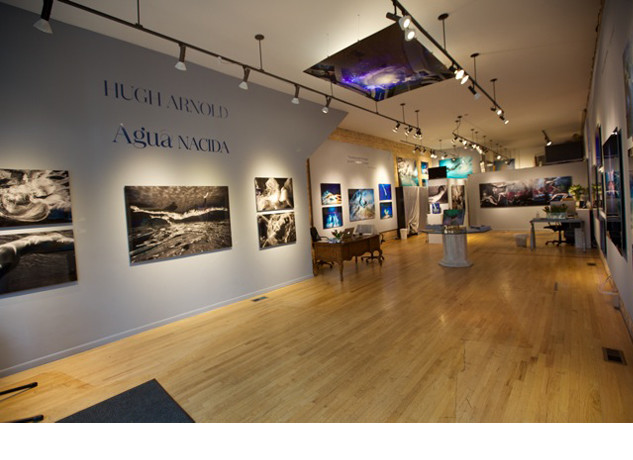