Metro’s creative retouch team were recently called upon to work on the official images by photographer David Barbour of Gerry Judah’s twin sculptures in the nave of St Paul’s Cathedral, erected to commemorate the 100th anniversary of the beginning of the First World War and unveiled officially on 13th April, Palm Sunday.

Renowned sculptor Gerry Judah had the intention to build a monument not exclusive to the First World War but to create two pieces which reflect the conflict still happening in the world today, aiming to encourage the observer to think about the ramifications of war and the urban decimation it brings.

The six metre twin white cruciform shapes sit underneath Wren’s great dome in the nave of St Paul’s, breaking up the grand vista to the Cathedral’s east end. They give a suggestion of the meticulously maintained war graves of northern France and further afield but in fact represent an utterly contemporary questioning of the continued need for warfare, bearing miniature models of the shells of bombed out architectural ruins and bringing to mind the horrors of total war and images of which we have become almost inured.

St Paul’s Cathedral itself is of course not unfamiliar with conflict.  The current building is the fifth Cathedral. The first was built on the site of a temple dedicated to the Roman goddess Diana. The Vikings destroyed the second St Paul’s and just after Christmas 1940, the Luftwaffe dropped twenty-eight incendiary bombs on or around the Cathedral, almost all of which were defused before exploding.  Its survival was miraculous, and memorably expressed in Herbert Mason’s famous photograph of the dome intact above the smoke of blitzed London.

Gerry Judah, whose work has been displayed worldwide, comments: “It is a great honour to have been selected to create these two new works as part of the World War I commemorations at St Paul’s Cathedral, a building that has historically come to symbolise the triumph of hope and redemption in the face of conflict. These sculptures are intended to appeal to our feelings of pity and charity, as well as filling us with hope for the future, which, I feel, is one of the principal purposes of a great place of worship, contemplation and meditation such as St Paul’s.”

Canon Mark Oakley, Chancellor of St Paul’s Cathedral, adds: “Gerry Judah’s striking sculptures confront us with the reality of a War that saw thousands and thousands of young people from around the world buried with white crosses over their remains. They also provoke us into interrogating the present world and the landscapes we casually view on the news every day, scarred and agonised by military hate in the hearts and minds of those who survive. Gerry Judah’s work ruptures the symmetry of the Cathedral just as war works breaks down human harmony. Placed where they are, we are invited to walk through them, and the failure and pain they represent, into a sacred space of hope where people in all our diversity are invited to come together to worship, to respect and to learn from each other. It is a work that starkly asks of us what it must now mean for us to be loyal to our shared future.” 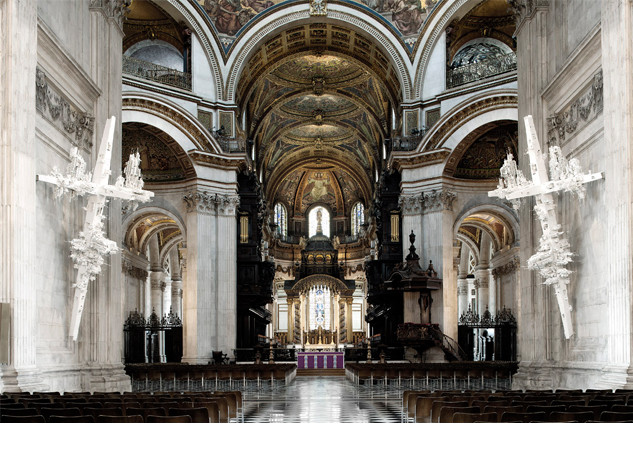