Metro is delighted to have recently undertaken creative retouch work on a unique project for photographer Red Saunders. In celebration of the Peace Treaty of Utrecht, which marks its 300th anniversary this year, Red was commissioned to produce a photographic mural capturing the atmosphere at the peace negotiations.  The tableaux will hang on the monumental façade of the City Hall, Utrecht, Holland until the end of September this year.

The finished tableau measures an incredible 200 square metres and is the largest single piece of work on which Metro has ever worked. Taking a staggering one hundred and fifty hours work the skills of our expert retoucher was put to the test as he and Red pieced over forty five images together. Red’s original sketches featured eight groups representing the key characters that took part in the Treaty negotiations and it was these that formed the core of the final Tableaux, which is remarkably close to the original sketch.

These key elements are made up of the Aristocrats, Diplomats and negotiators around a huge under lit table; a Hogathian Debauchery scene that accompanies it,  behind them the Calvinist bureaucrat and civil servants joined by the military are all watched by the citizens of Utrecht.  There are small vignettes around the main group that imagined the elements of the treaty, from African slaves to allegorical references to early mercantile capitalism globalisation as well as Dutch painting, food, still life, flower girls, peace doves etc.

All these elements were painstakingly positioned until Red was satisfied that the image as a whole worked as a giant Tableau and still retained the magical realism of his original idea.

Red was commissioned for this year-long project after individuals from the Arts Council of Utrecht witnessed Red’s “Hidden” exhibition at the Museum of London back in 2010.  As in ‘The Agreement’ these rich and inspiring images use a modern cast with period touches to depict key moments and characters in the history of the ordinary people that have been Hidden from History.

Red said: “I like to shine a little photographic light on these events to reimagine important moments in the long struggle of working people for democracy and social justice. Kings, queens, war and great men have dominated the history we are taught”, he continues “ Quite simply ambitious community arts projects like these could not happen without the support of all our volunteers both cast and crew, and the sponsorship of companies like Metro whose enthusiasm and support for the project were vital.  Big thanks to all at Metro from me and UCK in Utrecht.”

The tableau can be seen at the City Hall, Utrecht, Holland until the end of September 2013.

Click here for a detailed look at the final tableau and a full description of all the elements;
more images and information about the project can be found here 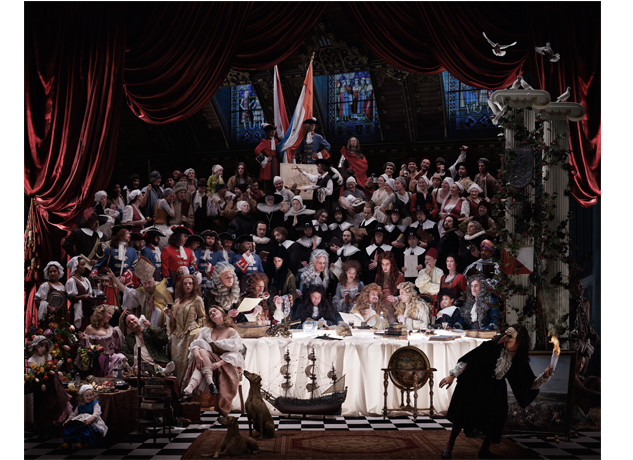